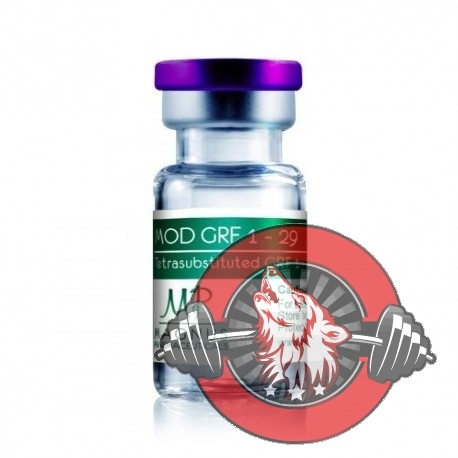 MOD GRF 1-29 is a peptide used to increase growth hormone production. This peptide is analog of a growth hormone releasing hormone (GHRH). It works same as the GHRH, and may be referred to as being a GHRH.

The principle use of MOD GRF 1-29 is to provide enhance the growth hormone levels, which also results in increased IGF-levels. Increase in the level of IGF-1 can aid fat loss and in some instance can aid muscle gain as well. Generally, MOD GRF 1-29 can use as altemate plan of using growth hormone , and rarely combined with growth hormones.

The combination of MOD GRF 1-29 and GHRP is synergistic. The GHRP stimulates a pulse of growth hormone release, and the MOD GRF amplifies it.

Reasons to consider using a peptide stack with MOD GRF can include improved muscle gain and increased fat loss, when used in combination with anabolic steroids, improved healing from injury and cosmetic improvement of skin. Its more efficient to target its use to times where muscle mass is desired and accelerated improvement in body composition. It can also be use on an ongoing basis where the goal is an ongoing increase of growth hormone levels. It recommended that ongoing dosing of MOD GRF 1-29 peptide stack should be at the lower end of recommended range. Dosing can be full-strength, but only once a day, with injection timed shortly prior to sleep.

MOD GRF 1-29 is typically provided in vials containing 2 mg of lyophilized powder. The contents should be reconstituted by adding bacteriostatic water.

An insulin syringe is used to inject the desired amount. Injection may be intravenous, subcutaneous or intramuscular. If the desired peptide solutions form a GHRP vial also drawn into same syringe. It will reduce the total number of injections required.

MOD GRF 1-29 an aid in falling a sleep and sometimes has the side effect of increasing vividness of dreams.

The natural hormone also found to promote sleep, so it is not surprising that this analog does so as well.

Addition of MOD GRF 1-29 when using a GHRP product can increase the stimulation of growth hormone production. Dosing is typically 100 mcg a time, taken at the same time as a GHRP product such as GHRP-2 GHRP-6, hexarelin or ipamorelin.