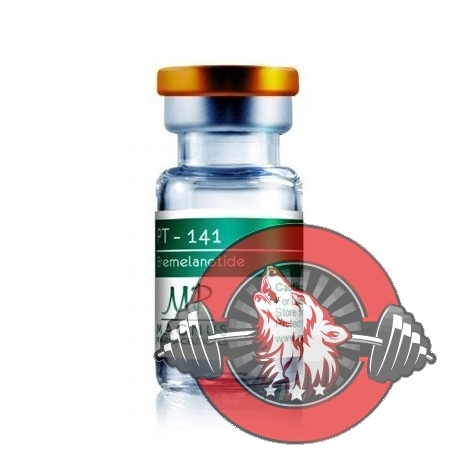 PT Bremelanotide141(Bremelanotide) is a peptide form of the Melanotan 2 drug. Bremelanotide is largely similar to the action of Melanotan 2. It also gives increase effects from libido and increases the effect of the sun. There is no amide C-terminal unlike the original form the PT-141.

Bremelanotide is a peptide melanocortin receptor agonist which is under development by Palatine Technologies as a treatment for female sexual dysfunction.

Bremelanotide is mainly used in the treatment of sexual dysfunction and lack of sexual desire. Originally Bremelanotide designed as an analog form of Melanotan 2. PT141 also can greatly increase the tanning of the skin of the person as a metabolite of Melanotan. Melanotan 2 able to spur the melanocytes to excrete more melanin.

Both men and women actively use Bremelanotide. It not only improves the blood circulation in the pelvic area, but it is also able to directly stimulate increased libido, as most of the drugs are similar in action. PT-141 comes in the form of powder, it mixed with saline and administered subcutaneously or intramuscularly for use. Through the nervous system influencing melanocortin receptors that PT-141 stimulates sexual desire.

The Development of PT-141

PT-141 was developed form the Melanotan 2 peptide, ethic underwent testing as a sunless tanning agent. In initial testing, Melanotan 2 did induce tanning but additionally caused sexual arousal and spontaneous electional as unexpected side effects in nine out of the ten original male volunteer test subjects. Palatine completed patient treatment in its Phase 2B clinical trial in premenopausal women with FSD primary data analysis and the announcement of top-line results anticipated in first-half of the fourth quarter of the calendar year 2012

How to take PT-141 Bremelanotide

Use insulin syringe for the introduction of PT-141. When it introduced into the body,3-4 hours after injection the higher concentration of a substance in blood is reached. Up to 10 hours the active periods of the drug is lasts.

Single administration is 0.5-1.5mg. Usually, one vial is enough for 6-8 injections. The vial is entered on the wall of ampoule saline and a rotational movement is mixed. A common form of storage of vial is the dilution of the drug and then set into syringes and freeze. Prepared ion is thawed before injection.

During the period of use of the drug Bremelanotide to enhance the tan shown stay in the sun for 30-60 minutes. Long sunbathing is not necessary. By sunbathing improvement effects is not affected, but may cause burns of the skin and the side effects of the drug in the form of aide spots.

It has almost extremely positive reviews. Bremelanotide with the combination of Viagra enhance its positive effect, many people use it in the old age

To buy quality PT-141 Bremelanotide you can always get it’s an online store.  We guarantee you the highest quality products at the best price.