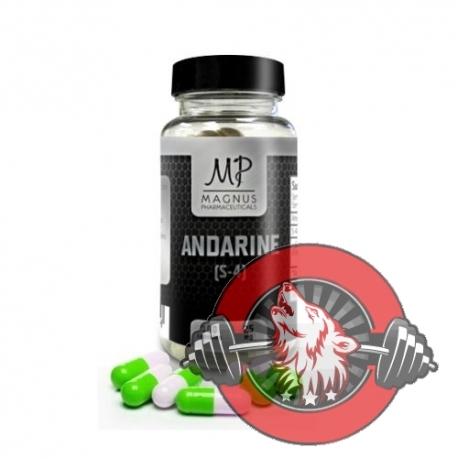 Andarine (s-4) – Magnus gives the great effect on the fat burning process just because of androgen receptor binding affinity, in the adipose tissues of the body. Researches of different scientists also show that there is unique lipoprotein decreasing activity (LPL), it is an enzyme for lipoprotein accumulation (storing of fat). This drugAndarine (s-4) – Magnus helps in reducing the fat due to the anabolic as well as androgen effects in muscles tissues. It seems that there is a great increase in the vascularity and gives promotion to a hard look, and low quality, with low water retention.

It is also called S-4

In the world of athletes and bodybuilders, this drug Andarine (s-4) – Magnus act as ideal because it has no side effects as many other steroids have.

It is just because of some side effects of vision. The doctors recommended almost 5 on,2 off dosage of it. Andarine (s-4) – Magnus is given to the patients for 2-day gap in the 6 to 8 weeks.

The short time side effect is due to the M1 metabolite and it contributes the night blindness and there is slight yellowish tint to the vision. But sometimes these side effects are permanent or sometimes are temporary. If there is some serious problem occurs, then the dosage must be given after 2 days gap with the quantity of 5 on 2 off protocol. It is necessary to consult the doctor also.

Varnish the area where more Andarine S-4 Magnus is seen. Some of the steroids are considered as cutting steroids and it includes Winstrol, Anavar. These steroids play a great role in leaning the body bit not helps in making the muscle mass of the body. The SARM Andarine S-4 Magnus have the resembling property like that.

The contribution of the androgen is suggested by the adipocytes and preadipocytes tissues in human due to the presence of androgen receptors. The development of adipose tissues is controlled by r=the regulation of there own receptors. As the AR binding affinity is due to Andarine S-4 Magnus, it gives the similar fat burning or destroying effect. Andarine S-4 Magnus also gives effect on the decrease in LPL (lipoprotein lipase), it is an enzyme causing deposition of fats in the body. Andarine S-4 Magnus also uses in fitting a cutting protocol for the reduction of body fat with the maintenance or regularity of muscle growth in hypocaloric conditions.